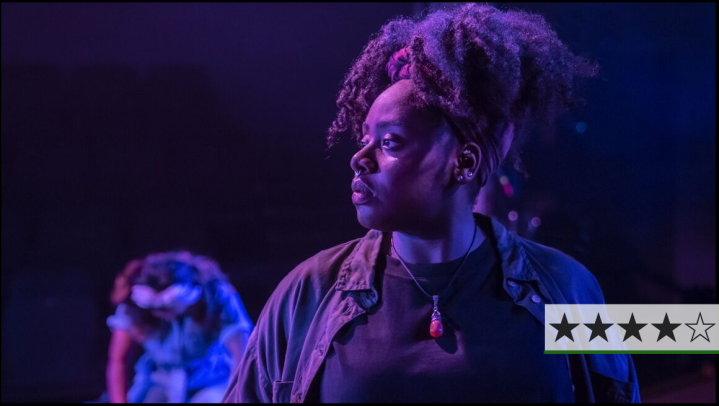 Based on initial impressions of Chiaroscuro from the marketing materials alone, one could be misled into thinking that the show is an in-your-face rock concert. One of the pull quotes describes Chiaroscuro as ‘explosive’ and the central image is of Shiloh Coke wearing an eccentric outfit with metallic blue lip-stick. As glorious as the image may look, it doesn’t quite prepare you for what to expect in this delicate and tender piece.

Chiaroscuro, originally written in 1986 by Jackie Kay, has been revived in a gig-theatre production with original music by Shiloh Coke. Directed by Lynette Linton, it doesn’t try to be grand nor self-important. It’s just raw; a frank and realistic depiction of four fully realised women. The set-up is simple, these women explain the origins of their individual names. As the play unfolds, we see these characters attempt to come to terms with their identity and sexuality.

Here’s why Chiaroscuro is wonderful. It’s a treat to see women of colour on stage as their authentic, human and troubled selves, rather than as the marginalised one-dimensional characters that we’ve seen one too many times before. There’s one woman called Aisha (Preeya Kalidas), who’s a female Carpenter. Have you ever seen a female Asian Carpenter on stage? We also meet Beth (Shiloh Coke), a social worker of West Indian heritage, who courts Opal (Anoushka Lucas), a softly spoken and benign nurse. Lastly there’s Yomi (Gloria Onitri), a single mother from Nigeria. Each performer has talent in abundance as they interchange the instruments that they play and sing these beautifully lyrical and original songs.

Chiaroscuro can feel like a slow burner at first. But as the play progresses, all its layers are gently peeled away and the vulnerabilities of these women are presented naked before us. We see how challenging it is for Opal, an orphan of mixed race heritage, to reconcile her identity. She has a torturous relationship with her mirror and when she looks into it, her reflection whispers ‘you think you are white until you look into me’. For Beth, she puts up a confident front but underneath it all, she has this buried desire to love and be loved openly and deeply but she’s too fearful to admit it.

As the young love between Opal and Beth begins to blossom, they find themselves having to conceal their relationship from Yomi. Yomi is outspoken and nonchalant in the way that she antagonises Beth. Many will be familiar with this act that Beth and Opal partake in where they conceal their relationship and present a ‘tolerable’ version of themselves. All this just to please others who aren’t able to embrace all that Beth and Opal are. Although written 30 years ago, it pains me to think that situations such as these most likely continue to happen in more living rooms than we’d like to admit.

In the final group number, the women let down their gorgeous hair of different styles, wear these fabulous outfits and celebrate all that they are. In doing so, they are spurring us all to follow suit.

Chiaroscuro runs at the Bush Theatre from 30 September to 5 October 2019 at the time of writing.