In 2019, my theatre-going habits changed radically: I visited a number of great Off-West End venues for the first time; I’ve seen more plays than musicals (*shock horror*); and seen over 100 shows, averaging about two a week. I’d like to say a big thank you to all the productions who invited me to review their work this year. Theatre in the UK, particularly in Off-West End venues is thriving and I’m so grateful to have witnessed a range of original ideas brought to the stage.

This top 10 list was frustrating to compile. There’s no metric by which to measure what makes a show one integer better than another, but I’ve just about managed it regardless. Before we begin, there are two shows which deserve a special mention. Firstly, I loved NewsRevue, the world’s longest running comedy show, so much so that I saw it twice in 2019 and hope to catch it again in the New Year. Secondly, Jeremy Jordan’s Concert at Cadogan Hall with its creative collection of musical medleys and epic story-time was unforgettable.

Museum Pieces looks at how reality TV interacts with actual reality once the show has aired. In separate monologues, the stories of four individuals are tied together by the TV show Naked Attraction in surprising and troubling ways. It was hilarious and provided interesting food for thought. 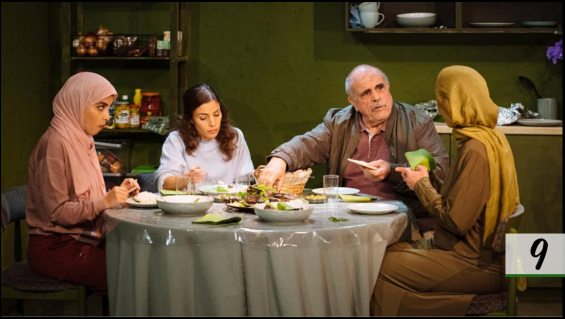 Playwright, Danusia Samal, hit a home run with ‘Out of Sorts’. It focuses on the cost of assimilating into British culture and the feeling of isolation and lack of belonging that this can bring. It feels rare to see a production which creates a genuine and sincere family dynamic. Although it was difficult to watch at times, it was also filled with humour and love.

The Last Five Years follows Cathy and Jamie over the course of their five year relationship which ends in divorce. It’s like the Netflix film ‘Marriage Story’ but Jason Robert Brown’s score makes it that much more heartbreaking. It’s the first experience that I can remember where I was in tears during the opening number.

Ragtime is an epic musical which focuses in on three American families during the turn of 20th century, a pivotal time in America’s history. This is my third time seeing this musical live and Sedos’ production blew me away. From the costumes, the 18-piece orchestra and the talented cast, it was in a league of its own.

Had I caught this musical on any other day it may not have ended up on this list. By chance, I caught it when understudy Vanessa Fisher took on the role of the Narrator and she did a sensational job. When it was first announced that Vanessa Fisher rather than Sheridan Smith would be performing, loud boos could be heard from the audience. But by the time Vanessa Fisher took her final bows, the entire audience was on their feet and Fisher received an extended applause. The thought of this still gives me chills.

5. The Canary and the Crow, Roundabout @ Summerhall

Anyone that’s been following this blog for long enough knows that ‘The Canary and the Crow’ was one of my favourite shows that I saw at the Edinburgh Fringe Festival this year. I was floored by not only how creative this semi-autobiographical gig theatre piece was, but how much it personally resonated with me. I’m looking forward to catching this one for a third time at the Arcola Theatre in January 2020.

4. Death of A Salesman, Piccadilly Theatre

The performances delivered by this cast was extraordinary. Without having studied the text, I can see why this play about Willy Loman, a tired salesman and his testing relationship with his family is such a classic. Wendell Pierce and Sharon D Clarke deserve all the awards.

Yikes, this play about Richard Gadd’s experience of being stalked was tense. When I say it was gripping, I mean I was grabbed by the collar and yanked out of my seat for its duration. It’s a ‘you’ll never guess what happened to me’ story, but told with heightened urgency and desperation. By taking a story so personal and disturbing and turning this into art – Richard Gadd’s piece easily earns a top spot on my best of 2019 list.

I adore Gabriela García – wherever she goes, I follow. In 2019, Gabriela led me to the Royal Exchange Theatre’s inventive revival of West Side Story where she starred as Maria, showcasing her beautiful range as a soprano. I didn’t expect this production could make such a classic feel so fresh and exciting. After I saw this, I was in a deliriously euphoric state. Also Jocasta Almgill was fabulous as Anita. I think she’d be great either as Angelica Schuyler in Hamilton or Natasha in Great Comet when it eventually comes to the UK.

I have nothing but the utmost respect for Helena Morais and what she achieved with Firecracker. It only ran for a few performances in one of the smaller spaces in the Ovalhouse, but it will vividly remain in my memory for years to come. It takes these lesser known stories about the origins of Capoeira, Queen Nzinga of Angola and fuses it with a coming of age story in modern day Brazil. It was so original, exciting and incredibly moving.

5 thoughts on “My Top Theatre Productions of 2019”