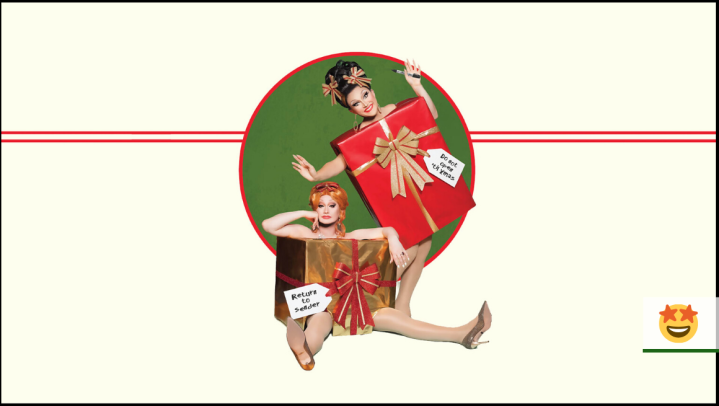 Ben De La Crème, or “De La”, and Jinkx Monsoon, are two drag performers best known for being contestants on Ru Paul’s drag race. In ‘All I Want For Christmas is Attention’, they come together to create a funny, touching, and occasionally sharply cynical show.

The show begins with the two being introduced on a large screen. On several occasions throughout the show the pair exit the stage and communicate with the audience in this way, like chat show hosts. In one of these they advertise a wooden nutcracker toy, but discover that each one is made out of a whole tree and has been made by children who have lost fingers in the process. They change sponsors several times until they settle on Henderson Sons and Grandsons and Great Grandsons and Great Great Grandsons, who sell wool which one can be turned into a badly knitted jumper in three weeks. Although not a main theme of the show, I found this acknowledgement of the environmental and social harm of Christmas’s commercialisation to be a welcome feature of the show.

The show mainly revolves around Christmas and tradition in general, with Jinkx being of the opinion that tradition is pointless and remembers her Christmases as being miserable, while De La clings to happy memories of Christmas, and speaks of the tradition in a cynically positive way. Two lines I remember well are ‘Christmas being like a blanket smothering everyone else’s beliefs’, and ‘tradition being a weight which held everyone down with its pointless rituals.’ Throughout the show De La has conversations with her dead grandma’s spirit through her egg nog mug, a cute and thoughtful feature of the show.

The show is full of bawdy material, with Jinkx delivering perfectly timed innuendo jokes, and a sexy Christmas elf helping the two in and out of a variety of costumes. There’s plenty of singing and dancing, including a new version of Lorde’s Royals (renamed spoiled) by Jinkx, and a dance with De La dressed in a Santa outfit and Jinkx dressed as his sack. But the most entertaining and most controversial skit had to be when De La played the Virgin Mary and Jinkx the angel Gabriel, God’s “wingman” who’d like to put his baby in Mary.

Finally the two conclude that tradition should be kept alive but constantly reinvented. De La realises that her positive memories of Christmas stem from the fact that she was always drunk on egg nog, and her grandma’s spirit admits she didn’t have particularly fond memories of Christmas either.

All in all the show was a lot of fun, with some enjoyable quirks, such as De La and Jinkx controlling what the other says and does by writing script lines and stage directions (at one point Jinkx sends De La falling down two flights of stairs), and some interesting comments on tradition and the commercialisation of Christmas. The two are full of energy throughout and loved interacting with the very responsive audience. The 90 minutes they were on stage flew by and left the audience  wanting more.