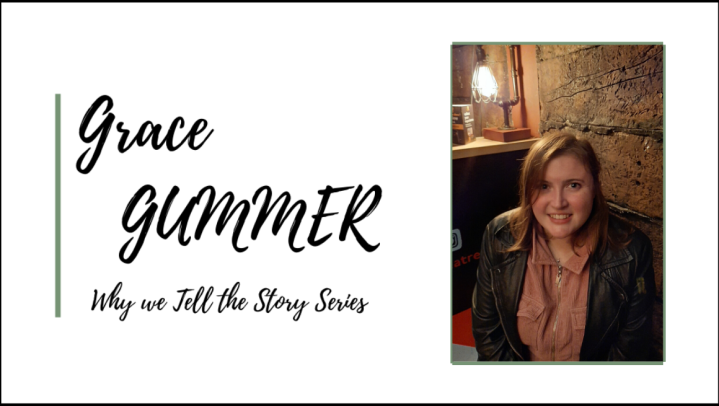 My next wonderful guest in this series is Grace Gummer, director of ‘Germ Free Adolescent’, which is running at The Bunker Theatre this month.

During the show’s run, the Bunker Theatre announced that unfortunately it will be closing its doors in March 2020 due to a proposed redevelopment of the site. The converted car park near London Bridge is known for being an inclusive space for all artists and this news was sad to hear and it will be a loss to many.

In this interview, we discuss what it’s been like directing Natalie Mitchell’s personal play and what the Bunker Theatre means to her and other artists. A huge thank you to Grace for featuring in this series and being so generous with her answers.

Q: Can you tell us what ‘Germ Free Adolescent’ is all about?

A: The bravery of teenagers. Intimacy. Courage. The fact we’ve all got so much going on on the inside. Ashley and her boyfriend Ollie are celebrating their 3 month anniversary and planning to have sex for the first time, but it doesn’t go to plan. They’re holding a lot in about themselves, particularly Ashley, who lives with OCD but is keeping it a secret.

Q: How did you first come across Natalie Mitchell’s play and what drew you to work on it in particular?

A: Our mutual friend Alex Austin put us in touch to work on the development of another play, Things Fall Apart, with the amazing Desara Bosjna. Two strangers form an unlikely alliance and try to take over their local library, it’s about communal space and the power and the limitations of stories. A few months after, Natalie responded to Chris Sonnex call out to working class voices and Germ Free Adolescent was programmed. It was pretty insanely quick – Nat called me on the Monday, I read it on Tuesday, Wednesday she said lets go, and Friday was the season photo shoot. (I chilled on Sunday).

Natalie’s work wears its heart on its sleeve, and I don’t know anyone else writing like that. There is no pretension, it’s pure, emotionally direct and doesn’t hold anything back from the audience. She proves that you can tell a story that is both accessible and complex at the same time. The character of Ollie is so so flawed but also funny. It’s a completely honest representation of a lot of teenage boys before they’ve properly worked out who or how they are meant to be. We don’t need to like him but the writing asks us to understand him. At the end, it’s not as simple as her being cured and them skipping off into the sunset, but there is joy. I think a lot of people would be afraid of that mix, but not Nat. It takes fierce courage to write like that.

Q: For anyone who hasn’t been involved with directing before, can you describe what the creative process is like? Especially working with a two person cast?

A: Such a hard one to describe and really massive, I’ll definitely only be able to scrape the surface.

First of all, I remember for ages wondering what ‘process’ meant and why everyone banged on about it. I’m sure it’s obvious to everyone but I genuinely never had anyone explain it, so maybe it would be useful? Obviously ignore if not or if you disagree with this description.

My understanding is that it’s basically your plan of how to make something. There are some standard things, but also you have to individualise it to you. Let’s say you loved to cook and you were making a shepherds pie: you know you gotta mash the potatoes but there’s a thousand things to consider in doing so. You can make them sweet potatoes, use a masher or a fork or a ricer, or even crumble some ready salted crisps up and shove them on top.

And it completely depends on the type of work you make. I’ll talk from the perspective of directing new writing, cos that’s what Germ Free Adolescent is. At first it’s reading, reading, reading, talking to Natalie, we also had a day working on the text for Natalie to redraft, and last but not least, putting your team together. Because the world was so important I started with the designer, I’m a big fan of Lizzy Leech and was so excited she wanted to come on board.

Teenagers, and how they relate to each other, is at the heart of the story. It’s also direct address, speaking entirely to the audience, which makes explicit the fact they’re doing everything while being watched. This reminded me of how much teenagers live in and occupy public spaces. Before you have your own place, parks, schools and high streets are where some of the most important moments of your life happen: like you know when you see a couple at the bus stop. On the other hand, the privacy of your bedroom is so special, but even then you have social media and parents coming in and out. Later in rehearsals, we had a wicked day trip to Chatham, visiting all the places Ashley and Ollie might hang out. Lizzy has done an incredible job of translating these spaces into the set in a way that the actors can properly occupy.

Then there’s rehearsal. From my experience both assisting and directing, and from chatting to my mates, I think most people’s process includes three things, sometimes in this order: text work, physical work, putting it all together/staging (we had three weeks rehearsal so broke it down like that). But there are so many different ways to approach each thing. I try to adapt my process depending on the project. Two people wasn’t a huge difference to other creative processes, but we did have to think about the fact almost the whole play is direct address, when the actors speak to the audience. A big question was how much are they in the story – how much are they telling and how much are they embodying?

For me, it’s important to tweak the process for what the team needs. Because we’re making a fringe show without ACE funding, time with the creative team is precious. Without much money, you can’t ask people to be around all the time. We agreed that I would have staged the play by Thursday of the final week so the creative team could see it, which is a little bit quicker than usual for me. I always do a couple of drafts of the staging before I’m happy. Usually I do this scene by scene but this would have taken too long to be ready for a run after 13 days of rehearsal. Instead I just had to shape the staging from watching the whole play. I always knew that the first run was going to be rough, and the team were sort of a bit what the fuck, but that’s OK because I’d built it into the process and it was all in the plan. It can be tough, but you can’t let being scared to fail get in the way of anything, but it’s also so so fun and I love my job.

Q: This show has been described as an OCD love story which is not the kind you often hear about. How has this show, if at all, been different from the projects you’ve worked on in the past?

A: I haven’t worked before where the writer has used so much personal experience. Natalie has written the play both in her hometown, and using her experience of living with OCD. I always feel the weight of the responsibility to the writer, to handle with care the thing they’ve had the courage to drag up from their guts, but that weight was doubled with Germ Free Adolescent. Natalie was incredibly generous in talking about her experience with us, but it was important to be sensitive to this.

Because stories are so powerful, they can be dangerous in creating and reinforcing stereotypes that are both damaging and minimise people’s actual lived experience. (See Big Bang Theory; see tidy people saying “they’re a little bit OCD”, you are not so please stop saying it.) This is why it’s so important that people get to tell their own stories. We could never give a definitive representation of having OCD, but that’s OK because there is no definitive version of OCD. Working with someone who has written from lived experience, it was important to let Natalie take the lead and listen to the specific story she was telling. For us that was four things: OCD can be invisible; it crashes in on your life sometimes when it’s the last thing you need; compulsions are individualised and often random, and the stakes of performing them are high; it’s completely exhausting carrying OCD around, especially in secret.

Q: Many of us were surprised and saddened by the recent news that the Bunker will be closing in March 2020. What has it been like staging the show in this venue?

A: I’ve been talking to people and a lot of us are like, where can we work now? It feels like the Bunker supports and takes more perceived ‘risk’ on artists with a variety of experiences more than anyone else.

The programming of the play came out of Natalie responding to Chris Sonnex tweeting to ask what he could do for working class artists. Natalie has been writing for 13 years and this is her first London run. This is both important politically, but also artistically. I don’t believe in objective value: people who are in charge decide what’s considered valuable or ‘good’. If those people are all the same as each other, patterns emerge and then get labelled ‘good’. But if you break the homogeny of who these people are, exciting and different things come through and move the whole of theatre forward. Just like the beautiful emotional directness of Natalie’s writing. John McGrath said that in his experience, middle class audiences are more embarrassed of emotion onstage. It frustrates me so much when people use ‘EastEnders’ as a lazy catch-all pejorative term to criticise a writer. The Bunker recognises both the political importance of representation but also the art that comes with it, from My White Best Friend to Box Clever.

And how was it making a show here? Exactly as you’d expect. It’s still the fringe, so it’s hard and at times imperfect, but at The Bunker you’re never left alone in it. It doesn’t always feel like that in this industry. With Germ Free Adolescent, we pushed for such much that The Bunker (particularly David Ralf) have made possible: three curtain raisers from groups of young people from Chatham and Southwark; a live stream version for audiences at home; and for two previews with full proper days of work even thought the run was short. They never gave up on us and our ambitions, and backed us all the way. Theatre will be a duller place without it, we’ll lose brilliant artists and art who just don’t get the support or space elsewhere. It cannot be the end.

Q: Finally, what should audiences expect when they come to see Germ Free Adolescent?

A: A play that will resonate with anyone that’s ever been a teenager.

Thanks for reading! And a big thank you to Grace for the interview. Germ Free Adolescent is running at the Bunker Theatre between 29th October and 9th November 2019 at the time of writing.