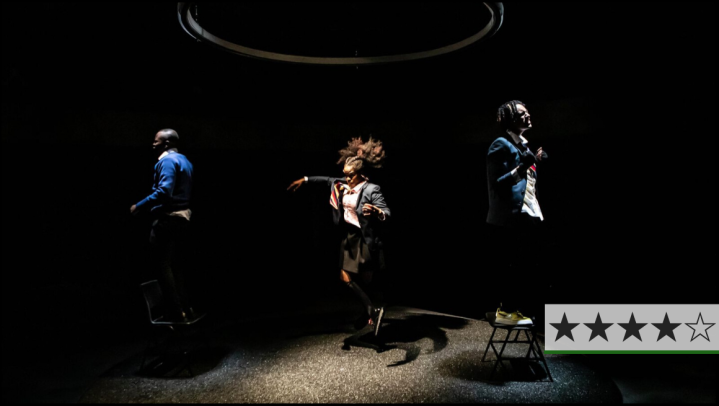 Little Baby Jesus is centred around the lives of three black teenagers as they wade through the intersection between childhood and young adulthood.

Joanne (Rachel Nwokoro) is a loudmouth wisecracker. Often her breakdowns of a situation will be punctuated with the words ‘real talk’ to let you know that she ain’t chattin shit (real talk). If you wanna know about the playground hierarchies, Rugrat (Khai Shaw) is your man. He knows his place and the place of others at the school. He also couldn’t care less about the teachers, finding it amusing to mock the unfortunate length of a teacher’s head. Kehinde (Anyebe Godwin) is the more sensitive soul who has a deep rooted appreciation for his twin sister.

The trio take it in turns to narrate their adolescent experiences on the small circular stage at Orange Tree Theatre. There’s a free-flowing energy between the small ensemble cast. When one steps up to begin their monologue, they’ll ping the music to begin or ping one of their scene partners into life to aide with the storytelling.

With most shows that you see, it takes the first few opening scenes to interpret the lay of land and work out the type of experience that you’ll be in for. But with Little Baby Jesus, it isn’t as straightforward.

You enjoy the ride and the jokes along the way but there isn’t a clear direction of travel at the start. It’s only in the second act where our characters become increasingly vulnerable that things take quite an interesting turn. They find themselves stumbling on pivotal moments in their lives where their growth spurt begins and we share in this learning experience with them.

But when I say you enjoy the ride up until this point, the sharp observations in Kene’s writing should have you cruising on a wave of nostalgia. From seeing the self-regulating playground rules which come into force when a football is thrown over the fence to the frenzied drama when there’s beef between two kids, it transports you right back. I say this, but remain acutely aware that not all the members of the Tuesday night audience may have responded to this in the same way.

Actor and Writer, Arinzé Kene showcases vivid and creative writing in this piece. In one scene, Joanne describes how a man at the laundrette is ‘talkin so slick you could see the crude oil on his tongue’. Kene’s writing is most powerful in the scene where Joanne describes her experience of falling in love with reference to magnets. For a subject that’s been described to death, I was floored by how Kene was able to conjure up such moving imagery here.

Tristan Fynn-Aiduenu, who recently directed Firecracker at the Ovalhouse , knocks it out of the park again with this one. He has a gift for shaping work into something that is kinetic and exciting. And of course the production wouldn’t work at all if it weren’t for the lead performances from Nwokoro, Godwin and Shaw. They are all dynamic in their roles and there’s an effervescent chemistry between them which makes it all the more enjoyable to see.

I’ll be the first to admit that I didn’t understand everything about Little Baby Jesus. In reading other reviews, I’ve noticed a tendency to criticise or gloss over the parts that I’ve been most fascinated yet perplexed by. Why can’t anyone remember seeing Joanne’s love interest? Or who is this mystery man that Rugrat refers to that only he can see? Are the colours we see at the end meant to symbolise anything? But rather than pick it apart, I’m comfortable letting the show breathe and occupy a space which I don’t fully comprehend whilst still admiring it from a distance.

Little Baby Jesus is running at Orange Tree Theatre until 16 November 2019 at the time of writing.