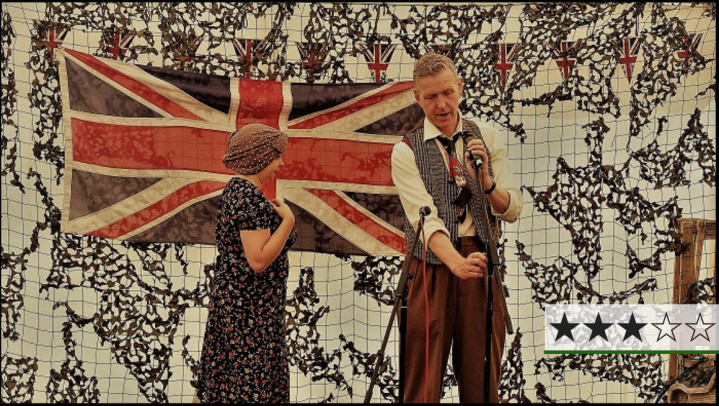 Paradise Lodge is an endearing and moving show. Written by Steve Cooper, it gives us an insight into what it’s like when a loved one suffers from dementia and the care homes where many dementia patients reside once they’ve been handed over by their families.

In the intimate space in the Tabard Theatre, the audience acts as residents in the Paradise Lodge. The fun musical duo, Eric (Steve Cooper) and Kylie (Sophie Osborne) known as the Doodlebugs are our guest performers. Eric has become somewhat of a resident performer at the venue with a series of other unsuccessful partners. Kylie is a new recruit and feels dismayed that this gig wasn’t quite what she had envisioned when she initially signed up.

Through a series of flashbacks, we learn of the time leading up to when two of the residents at the home, Vi and Roonie, first moved in. We see how their illness takes over and how their family manages the experience in different ways.

The small yet mighty cast of two play a variety of roles and are seamlessly able to transition into each with the simple change of a prop or costume taken from a stand at the back of the set. Both Cooper and Osborne achieve hauntingly believable characterisations of each of the individuals that they portray.

The most memorable moments of the show are when the duo sing old war songs and have fun interactions with the audience. The ukulele, played by Cooper, is a powerful social instrument that has the ability bring people together. As Cooper strums the opening chords to a song, I was surprised by just how quickly the audience were able to join in. Although I had only known one of the songs, thankfully the pair help us out with the lyrics so you are not left out from the lovely communal feeling. Kylie questions why is it that men are so obsessed with war and why they couldn’t perform anything more modern. I also questioned the show’s music selection at the start, but then all is revealed during the emotional finale.

This play is one that’s inspired by Cooper’s own experience of caring for a family member with dementia. Living with the illness can be a demeaning existence and it’s a topic which people are often uncomfortable to talk about. Shows such as Paradise Lodge play an important role in tackling the stigma around this and improving awareness.

Paradise Lodge will be running at the Tabard Theatre in Chiswick between 11 and 24 October 2019 at the time of writing.