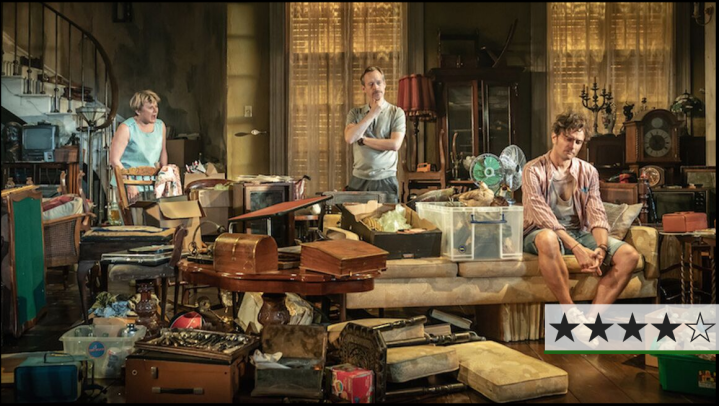 Behind the closed doors of the run-down, grave-yard adjacent home in Arkansas, the Lafayettes are caught in a storm of problems.

Lafayette Senior is dead and his family are haemorrhaging funds. His children have returned to the family home to make it presentable for sale even though it has become a hoarder’s paradise. Their long-estranged brother and his new girlfriend for some reason decide that now is the time to make a surprise reappearance. Among the clutter, there’s a book of disturbing images that their father may have owned, and that’s when the shit starts to hit the fan of the plantation home.

What makes Appropriate good is that there’s something also oddly delicious about being a spectator to the heated arguments in the play. It’s the kind that is usually private and you know you ought not enjoy being privy to. The high-powered cast members, directed by Ola Ince, deliver these quick-witted insults with relentless persistence. Each swerve is met with a gloriously entertaining comeback and you find yourself not knowing whether to gasp, laugh or despair at the hysteria of it all. Monica Dolan as Toni Lafayette is just insanely good. Toni is high strung and barely keeping it together yet refuses to be outnumbered by her two brothers when attacked.

But what is there to argue about? Well plenty. The discovery of the book of images is akin to the opening of Pandora’s box as it raises the prospect that their father had deep rooted prejudices. But without the father there, they’re left without a definitive answer. Toni is hell-bent on defending her father’s honour though while her brothers aren’t as much. The arguments heighten and become personal. We see these flawed characters dig into one another’s weaknesses but often lacking the self-awareness to see the full extent of their own shortcomings. The result is that you are fully drawn into their drama and sympathise with their inability to find clarity when confronted with uncomfortable truths. It’s a revealing depiction of a white American family yet also a troubling one as you see the indisputable influence that parents have on their children.

Playwright, Branden Jacobs-Jenkins, uses this compelling family set up where tensions are high to explore a myriad of themes which we tend to avoid in everyday conversations. It touches on race, child neglect and even pedophilia. Thanks to Jacobs-Jenkins’s brilliant writing, it’s an entertaining and thought-provoking piece which holds you in the palm of its hand.