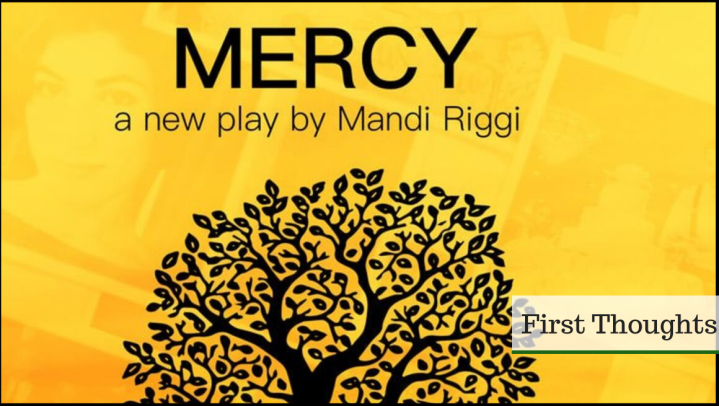 *This review shares my initial thoughts on Mercy following its rehearsed reading on 27 September, no star rating has been given*

In the rehearsed reading of Mercy, the actors take their seats on stage at the start. They are joined by an actor whose role is to read the stage directions. During the performance, the actors juggle the scripts in their hands as they deliver their lines and interact with their scene partners. There’s very simple staging and minimal lighting design.

It’s a fairly bold decision to stage a rehearsed reading of a new play to a live audience. Without the assistance of costumes, sets nor props, the audience’s imagination has to work that bit more to see the piece as intended. But it’s a credit to writer, Mandi Riggi and director Nicky Allpress that although the production wasn’t fully realised, it was a compelling and heartfelt show.

Are our bodies just a vessel for a spirit that is destined for another world? Are we bound to respect the wishes of those who’d like to depart the world sooner than we’d hoped? Mercy deals with this question of how we confront death through a winning combination of dark humour and drama. The story unfolds in a non-linear fashion and reveals some fairly surprising twists that are best not revealed here. The strong ensemble cast all played a key role in bringing colour and vibrancy to the rehearsed reading.

In Mercy, the audience are a fly on the wall in the home of the Davoodpours, a British-Iranian family. The family are an intriguing mix of cultures that you’d be hard pressed to find represented anywhere else on stage. Sol (Andy Lucas), the father is Jewish and Amireh (Mandana Jones), the mother was raised Muslim but later converted to Judaism. The father is a larger than life character who passes his opinion on everything from the ‘Facebook marriage’ of his Oxford educated son Danny (Adam Sina) to his ‘thieving’ sisters in law. Sol is clearly at odds with the headstrong Amireh who isn’t afraid to challenge those around her and manoeuvre through difficult circumstances to get what she wants.

The play is rich with ideas and grapples with a variety of themes. It explores the middle-eastern family dynamic and the issues that surface when a couple from opposing backgrounds come together. We see the impact this has on the children, particularly the sparky daughter Yassi (Peyvand Sadeghian). We also witness the difficultly that Terri (Louise Young), Danny’s American wife faces when trying to integrate into a family whose culture is different to her own. At times, the pace slows during these uncomfortable mud-slinging matches between Sol and Amireh, but moments such as these are easily forgiven in the larger context of the show.

The message at the centre of the show is learning how we can be more merciful to one another in a world which constantly frustrates and throws issues our way. Dying with dignity and our apparent lack of control over how we eventually meet our end is something that I have always struggled to grapple with. A few years ago, I lost my grandmother to cancer. I say lost but it was fairly clear where she was headed when she refused chemotherapy. The play sensitively handles this topic of facing death which we will all, regardless of our background, inevitably have to do at one stage in our lives. For a rehearsed reading, Mercy certainly impresses and the final production is one to watch out for.