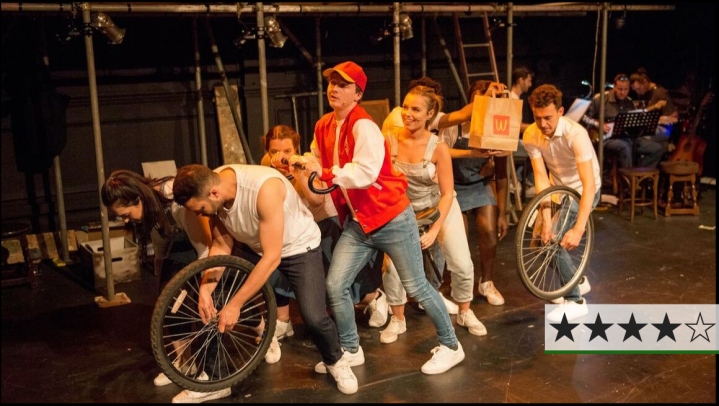 ‘Working’ is a musical adaptation of Studs Terkel’s 1974 book with interviews from a cross-section of individuals talking about their jobs. Some people go to see musicals to escape all thoughts of their 9 to 5. But in this musical, working life is exactly what you’re confronted with.

Given our political climate and the people that currently dominate our news stories, it is a welcome change to hear from everyday workers who we may see now and then but seldom hear from. From the school teacher and the flight attendant to the elder care worker and the tech support worker.

Through a series of separate monologues and songs, the show provides us with a range of unfiltered thoughts. An Ironworker (Kris Marc Joseph) for example laments the fact that their contribution to developing buildings is barely ever recognised. Or a hedge fund manager (Mikey Wooster) provides a staunch defence of capitalism and critiques government regulators. It’s a credit to the performers that as each new worker is introduced, each actor convincingly occupies the skin of those who they are portraying. Although there is little room for character development, it still feels as if we get to know each individual intimately.

Beyond the performances, Hi Impact have fashioned a visually interesting piece. Against a scaffolding backdrop, the eight principal actors wear white and denim and simply use a distinct prop or costume to tell the stories of 25 different workers. The actors often sit within distinct sections of the scaffolding and the lighting design subtly highlights the connections and crossovers between the characters layered within the text.

The show really starts to come alive during the musical numbers, thanks to Director/Choreographer, Amanda Noar and her inventive dance sequences. In the number ‘Delivery’, the ensemble cast animates the separate parts of a moving bicycle as the boy delivers a fast food order. Or in Cleanin’ Women, there’s some dynamic ‘mop’ – ography as the female members of the cast unite to sing the anthem song.

Stylistically, it’s hard to place the music as Stephen Schwartz in collaboration with Nina Faso brought in a range of composers to contribute to the score. The credited songwriters include Craig Carnelia, James Taylor and most recently Lin-Manuel Miranda when the show was reworked in 2011.

At a running time of two hours, is the material alone engaging enough to hold the attention of all audience members right to the end? That’s debatable. But thanks to Hi Impact Theatre Company and the talented ensemble cast, they’ve certainly created a piece which is well worth seeing.

Working: A Musical runs at the Upstairs at the Gatehouse from 10 – 22 September 2019 at the time writing.