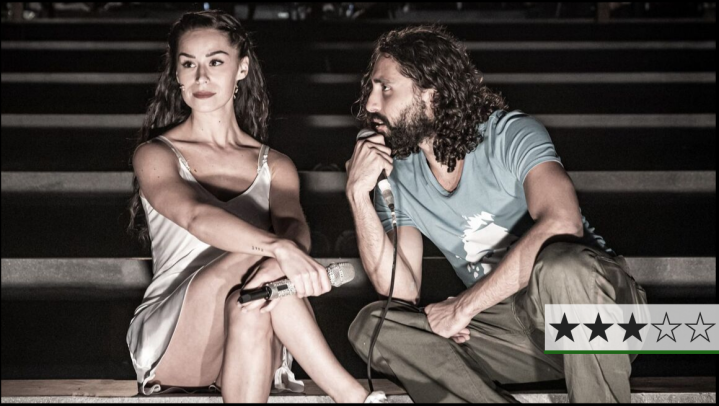 The recent revival of Evita at the Regents Open Air Theatre has divided audiences.

The musical charts the rise and fall of Eva Perón. Eva is born out of wedlock and has humble beginnings as a performer who dreams of going to the city. Through manipulation and cunning, she ascends to become one of the most infamous first Ladies of Argentina. The Tony Award-winning performance delivered by Patti Lu Pone in the role of Evita in 1979 arguably set the gold standard for productions to come. The musical is typically characterised by glamorous sets and elaborate costumes.

But this production disrupts this convention. There’s not much of a set nor many glamorous costumes to speak of. There are however multiple balloons, canons which shoot confetti out into the open-air venue, flashing strobe lights and more. At first you can’t help but question, what’s the next gimmick around the corner?

But what I hadn’t appreciated until the interval, is that this revival is directed by Jamie Lloyd. When you look into Lloyd’s career, he has a reputation for reviving productions which break away from previous theatrical stagings. This includes the gory and short lived West End production of Urinetown in 2014. There’s no denying that here Lloyd has sought to make his own mark on the show.

Lloyd has received praise for daring to take a well-loved show and updating it to feel current in our times. Eva Perón, performed by the fiery Samantha Pauly, wears a slip and trainers. She appears more like an indie rock singer rather than one who has risen to the highest social rankings in Argentinian society. During the number Rainbow High for example, this marks the beginning of Evita’s ascension to international stardom. But she isn’t given an expensive makeover, instead during her preparations, her silk slip is graffitied with colourful spray paint.

It’s clear that Lloyd likes to take risks and there are no boundaries when it comes to his art and creative expression. Che (Trent Saunders) is doused with paint. Microphones are chopped. But rather than marvel at the different artistic effects, at times I was left wondering how much did all of this cost? And how much effort does it take to clean the confetti every night?

Andrew Lloyd Webber’s notoriously complex and wildly creative score with lyrics by Tim Rice is no challenge for this cast. The choreography, by Fabian Aloise, is also energetically delivered by the tight ensemble cast. Although it may not be to everyone’s taste, one thing that this production has proven is that Evita is a musical that should not go stale any time soon.