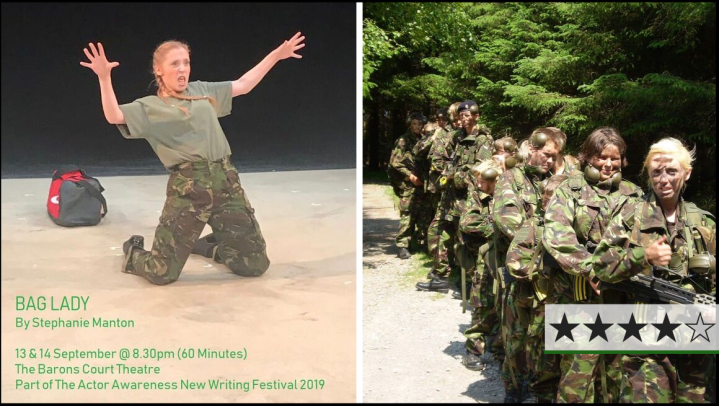 Bag Lady is a top-ranking piece of new writing. Stephanie Manton has written and stars in this semi-autobiographical show which takes place at the Combined Cadet Forces’ (CCF) annual camp. It’s hilarious, heart-warming and delves into a topic which isn’t often represented on stage.

In this solo performance, we join the young Kelly Carmichael (Stephanie Manton) and her pals as they escape the coastal town of Bridlington for one week and take part in the military inspired camp. Whilst wearing combat uniform and with her hair pulled back in two tightly plaited braids, we see Kelly work her way through the various obstacle courses, navigate the complexities of young-girl crushes and more.

Summer camps are often seen as something for kids to do to pass the time, but for Kelly, CCF means much more than that. She’s a foul-mouthed loose-cannon as she confesses ‘I’m small, agile and really fucking stubborn’. But as she takes part in the group tasks, she transforms. She is engaged, focussed and comes into her own. But like any young teenager, she has her doubts and anxieties about how she is perceived by others and repeatedly questions whether people are laughing with her or at her.

On the surface, Bag Lady is a real laugh. Not only does Manton know how to weave humour into her writing but she is successfully able to bring the audience along with her for the ride. At one point, we’re chanting along during the bus journey to the camp, next thing you know we’re feeling nostalgic as she does an all out dance medley routine to a string of guilty pleasure pop hits.

Despite its comedic exterior, there’s quite a lot to unpack within the 60-minute show. Here, Bag Lady refers to the derogatory slur aimed at people such as Kelly who are homeless. It is often said that in the military, it’s not your background that matters but your mental and physical stamina. But Manton brilliantly conveys the potent class rivalry between the cadets from Bridlington and Dulwich and also shines a light on her testing experience as a female in a predominately male environment.

Manton gives a dynamic performance as Kelly and the many other scene partners which she convincingly portrays. From the precise military hand gestures and arm signals, to the insider lingo which rolls off her tongue, it’s a universe which she clearly knows a lot about.  Thanks to Director, Kim Southey, it’s also a very physical performance. The high stakes assault course scenes are fantastically executed as Manton leaps across the stage, crawls on the floor and sprints with exasperated breath.

Bag Lady forms a part of the Actor Awareness Festival which is a campaign fighting for more equality, diversity and working-class talent in the arts. This show encapsulates exactly why this campaign is a well fought cause as it brings an exciting variety of stories such as this one to the stage.

Bag Lady runs at the Barons Court Theatre on 13 and 14 September at the time of writing.