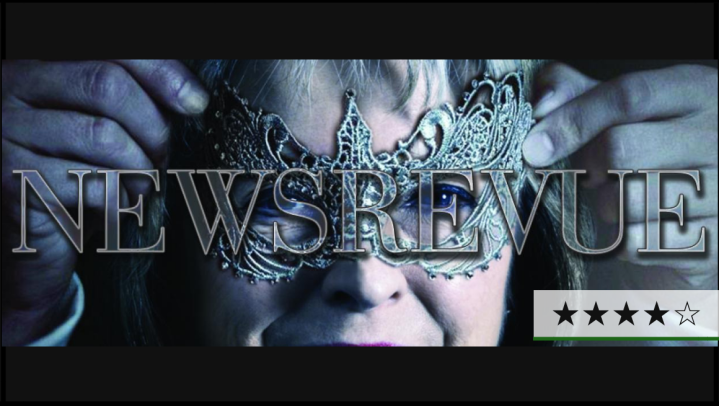 NewsRevue is bloody brilliant. The production, staged at the Canal Café’s pub theatre, is reminiscent of a musicalised Mock the Week episode. In a series of comedic scenes in quick succession, the show provides sharp satirical commentary on the messy current political situation we currently find ourselves in. Instead of lamenting at the shit show that Brexit is or the buffoon who holds the highest office in the US, this pokes fun at the farce that it all is and provides unexpected comic relief.

The genius creators take hot off the press news stories and find hilarious ways to incorporate the ripe material into the show. No topic was left untouched from Diane Abbott’s sneaky G&T on the Tube to even the devastating recent fires at Notre Dame. It’s impressively slick, expects you to keep up and in doing so manages to grab your attention for the entire ride.

The show is elevated due to the brilliant way it selects these well-known songs but rewrites the lyrics and creates entire musical numbers complete with choreography and beautiful harmonies.

We had cows wailing over the increasing popularity of veganism and soya milk to the tune of Michael Jackson’s Earth Song and a blubbering Theresa May re-affirming her position as PM in a somewhat rousing rendition of Destiny Child’s Survivor.

A personal favourite was the punchy ‘Don’t Stone the Gays’ to the tune of YMCA. The performers dressed as members from the iconic disco group, Village People plead against the ruling in Brunei to punish gay sex with stoning to death. Despite its flamboyant presentation, the lyrics had serious undertones which lay a damning critique on the barbaric laws.

The members of the four person cast can easily be classed as quadruple threats as they can sing, dance, act and quite effortlessly make you laugh. The sketches were a series of home runs with some on-going gags at easy targets including Trump, Putin and Kim Jong-Un. A few jokes took things a bit too far but there’d be no time to dwindle on it as they would’ve already managed a quick change and moved onto the next scene.

NewsRevue first began in 1979 and has been entertaining audiences in London and at the Edinburgh Fringe Festival ever since. To keep it fresh, the show is updated weekly and then every six weeks, a whole new creative team are brought in to shake things up. It holds the Guinness World Record for the longest running live comedy show in a theatre and hopefully will continue to for many more years to come.

NewsRevue is running at the Canal Cafe Theatre until 26th May 2019 at the time of writing.