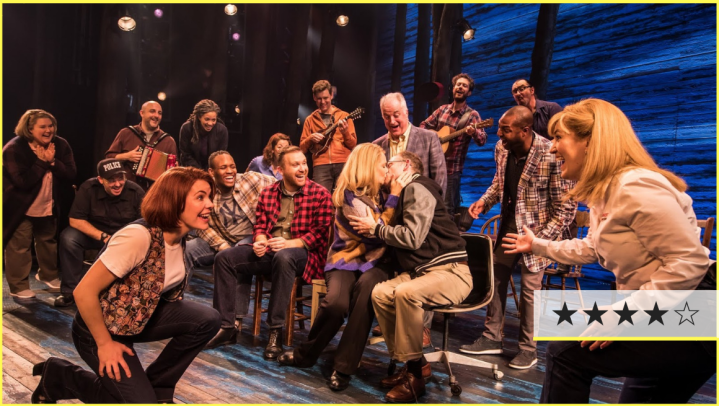 In Come From Away, a strong cast of twelve are able to bring to life this little-known story. A story in which a small Canadian town mobilised to accommodate the thousands of people who were stranded when their planes were diverted following the 9/11 attacks. At a time of hysteria over news which aims to shock and appal, I wish there were more shows like this one which seeks to display the good which humanity can achieve.

Following a successful run on Broadway, Come From Away has recently transferred to the West End’s Phoenix Theatre. The musical takes place in the week following 9/11 when 38 US bound planes were unexpectedly diverted to the small town of Gander, Newfoundland in Canada. The stories are inspired by the real citizens of Gander as well as the approximately 7,000 travellers who were stranded.

In the following days, the response of the people of Gander to accommodate the passengers was extraordinary. There were language barriers, different dietary requirements, rising uncertainty about when the passengers would be able to travel back and even a range of animals including exotic ones to take care of. But they all came together, pooled the resources they had, and made it work.

I admire the creators Irene Sankoff and David Hein for seeking to share the experiences of the thousands of stories they collected. Thanks to lots of costume changes and dynamic chair-ography, the relatively small ensemble cast are able to zoom into multiple stories. We learn about the experience of a muslim passenger on the plane, the apprehension of a gay couple when they first arrive and the desperation of a mother to know if her son, in a time pre-smartphones, is still alive. The people of Newfoundland meet the passengers with warmth and humility and even seek to traditionally inaugurate some of them as Newfoundlanders by making them down a shot and kiss a cod. It’s heartwarming to know that long lasting relationships have been developed since.

The music, performed by an energetic on stage band, has a Celtic feel and plays a large role in creating the mood in each scene. In the slow paced ‘28 hours’ for example, we learn how the weary passengers are made to stay on the aircraft when it first lands for over a day and came to know every inch of the plane. There are many joyous moments including in the finale when the cast all sing ‘I’m an Islander’ and the audience enthusiastically cheered and clapped along to the anthem-like song.

The events of 9/11 were a defining moment in recent American history. In the years which followed, we saw a marked shift in American Foreign Policy and many commentators note the subsequent rise in Islamophobia in parts of the US. Who would have thought that at this time of rising hate and aggression, subsequent events also transpired which actually showcased a surprising display of human resolve and togetherness? I would recommend for anyone who would like to see something moving which makes you think – what lengths would you go to, to take care of a stranger?