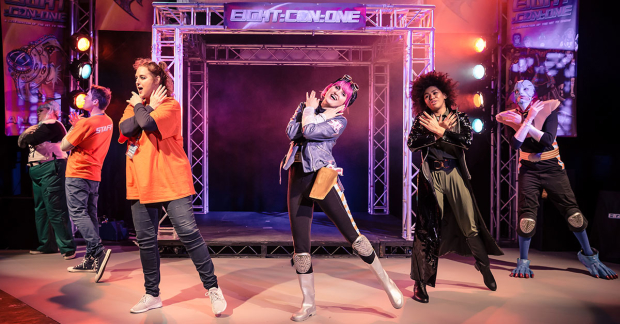 I found myself trying to explain Fanatical the Musical to a colleague at work. This made me realise that on the face of it, the show is quite a hard sell. The musical is set at a sci-fi convention and is about geeks who have an obsession with a fictional show called Angel-8. It’s an entirely original musical, doesn’t have that many known stars in the cast and is running at an off-west end venue.

Although the premise may not appeal to all audiences, I think if you are open to experiencing something new, which is not to be taken too seriously, you are likely to have a fun night out. You definitely don’t need to have an obsession with conventions nor science fiction to enjoy it.

Fanatical takes place over the course of a two day convention in honour of the sci-fi series, Angel-8. The day is thrown into chaos when the special guest, the series writer Scott Furnish, might not show up. It’s up to some unlikely heroes to save the day.

The show is a love letter to all the misfits who take solace in the world of their fandom. The opening number establishes how highly anticipated conventions such as these are and the incredible amount of pride their take in being associated with the series. It’s a section of society which I don’t know a whole lot about and so was intrigued to see them take centre stage.

The main stumbling block for me was that I just wasn’t convinced that the fictional TV series could have ever existed and amassed such a following. In the span of over 20 years we are meant to believe that there have only been 12 completed episodes. The more details they reveal about the show, the less I felt it held together. This scepticism lasted with me throughout and so prevented me from being completely immersed.

Despite this, I had a great time. It’s got some great performances and original songs. It’s encouraging that new talents, Matt Board (Music and Lyrics) and Reina Hardy (Book) have been able to bring their show to life. They join a steady stream of new musicals being staged in London in recent years including, Eugenius, Six and Mythic. The organiser of the convention, Trix (Suanne Braun) and her young side kick Baxter (Eddy Payne) were the standout performers for me. There are some great comedic moments including ‘I Wanna Sex At you’, which had me in fits of laughter. By the finale, I was on my feet doing the secret Angel-8 arm movements along with the cast and had a smile beaming across my face.

Overall, even though it may not appeal to mainstream audiences, I would recommend it.