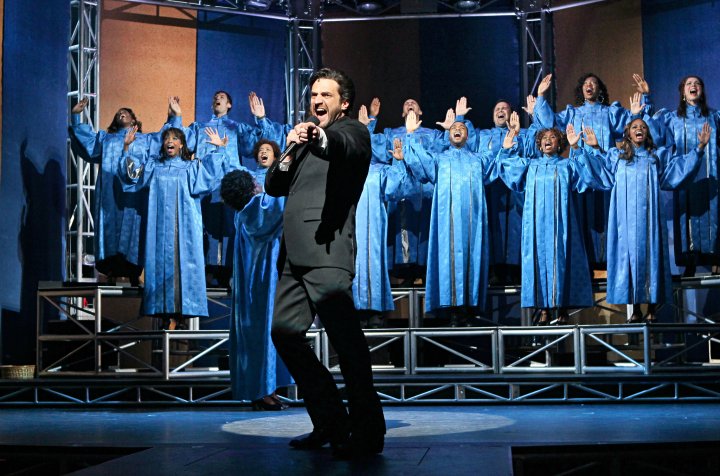 Alan Menken is a song-writing legend with 8 Academy Awards, 11 Grammy Awards and a Tony Award to his name. It’s an understatement to say that this guy is pretty good at composing a tune. Although he’s mostly known for his work with Disney (Little Mermaid, Aladdin, Beauty and the Beast), he’s also worked on other projects such as the cult favourite “The Little Shop of Horrors” and the soundtrack for the “Sausage Party” in 2016.

So it’s surprising that the Leap of Faith, which he composed the music for, had such a short life. The musical opened on Broadway in April 2012 and closed on May 13th after 24 previews, 20 performances and allegedly losing $14m in investment.

The stage musical is based on the 1992 film with the same name which starred Steve Martin. In it a con man called Jonas, played by Raúl Esparza (Taboo, Company), poses as a man of God and promises to deliver miracles during these shows he puts on. But it really is all a big scam to hoodwink people out of money. I remember watching a promotional video for Leap of Faith a while back now and wondering who is exactly is the target audience for this show and never cared to check out any of the songs.

I’ve listened the cast recording multiple times now and can definitely say it’s a hidden treasure. The music in this score is surprisingly spirit lifting and has a catchy feel as is common with Menken’s work. Here Menken also turns his hand to writing gospel tunes and does a brilliant of job of it. The best numbers are when Jonas is joined by the choir “The Angels” in songs such as “Rise Up”, “Step Into the Light” and the stirring finale number “Leap of Faith”. Leslie Odom Jr (Smash, Hamilton), who plays Isaiah, has a deliciously soulful voice and it is such a treat to listen to. The standout moment is when he riffs in the finale song. I have had to repeat the whole song multiple times in order to keep savouring it.

So Leap of Faith has now firmly secured a place in my saved Spotify albums. Join me next week to find out which new other album I plan on including!