Timothy Sheader’s thrilling production of Jesus Christ Superstar, currently staged at the Regent’s Open Air Park Theatre, follows Jesus in his final days before his crucifixion. The idea of retelling a biblical story is not new. Musicals such as Joseph and the Amazing Technicolour Dreamcoat, Godspell and the Prince of Egypt have similarly turned to the Bible for source material. However, what sets Jesus Christ Superstar apart, is the way it constructs this parallel between the mania which surrounded Jesus, a Jewish preacher, who lived almost two millenniums ago and the mania around a modern day rockstar.

In the show, we see the chronology of events as described in the New Testament. The Pharisees and the Roman authorities were threatened by the surge of interest in Jesus and his teachings. To suppress this, Jesus is arrested in the Garden of Gethsemane with the support of Judas, one of his own disciples. The show darkens in the second act, which is well timed in the Open-Air venue as the night draws in. In order to silence Jesus, he is brutally tortured and the show ends with his harrowing crucifixion. 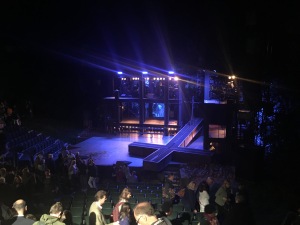 The musical, composed by Andrew Lloyd Webber and lyrics by Tim Rice, began its life in 1971 as a rock opera concept album. These creators were quite bold in using the musical format to delve deeper into the emotive layers and themes within the story such as betrayal, love, rivalry and suffering. Here, the focus is not on portraying Jesus as an almighty miracle worker. Rather Jesus, played by Declan Bennet, is a humble yet wise man who ascended to great acclaim due to the strength of his words. But he is also undeniably human. We see his anxieties and frustrations come to the fore as the troubling events unfold. I found that the addition of the musical dimension, allowed me to develop a new found sense of empathy with the crucifixion which I did not have before.

As is typical of ALW’s score’s, the music is wildly creative and was enjoyable to listen to live. Rock music as a genre has typically served as a vehicle for cultural and social movements and political activism. It is then only fitting that it is used to tell the story of the conflict and heightened tensions between a minority group of Jews and the political and religious authorities at the time. The electrifying band had a mix of classical and rock instruments and performed from an elevated section of the stage as if to replicate a rock concert.

In this revival, there is a variety of musical stylings; a standout for me was Maimuna Memon, who played Mary Magdalene. Her voice has a beautiful yet powerful reggae tone to it similar to that of Amy Winehouse. I was also intrigued by Peter Caulfield’s portrayal of Herod as a flamboyant Boy George-esque character. At first, when I saw Herod dart across the stage in a nappy, I thought although this provided well-timed comic relief, but it was fairly bizarre. However, on later reflection I thought this quite nicely represented the clash in outlooks between the mighty yet vacant Herod and Jesus who was softly spoken and had a warm voice in the style of James Morrison or Jason Mraz.

The choreography by Drew McOnie was engaging. In my review of the Wild Party, also choreographed by McOnie, I alluded to the fact that his dances overwhelmed the small venue. However, I felt that by contrast in the Open Air venue, the choreography was given the right amount of space to breathe and comfortably consumed the space. I particularly enjoyed the large group numbers in “What’s the Buzz” and “Hosanna” where McOnie effectively depicts Jesus’ “blind” followers as groupies who are all too keen to raise Jesus up and surf him through the crowd.

The standout performance for me was delivered by the 2017 Olivier Award nominee, Tyrone Huntley as Judas. Huntley has such a powerful voice which soared in the large venue. But more impressive for me was his interpretation of Judas. Typically, Judas is synonymously known with ideas of betrayal and treason and could have been played as a stereotypical villainous character. However, in Huntley’s performance, Judas is just a deeply troubled and inquisitive man. He was gravely concerned by the hysteria that surrounded Jesus towards his final days and feared that his original message was getting lost. In the number, Heaven on Their Minds he laments “All the good you’ve done, will soon get swept away, you’ve begun to matter more than the things you say”. It’s a very believable portrayal which helps to unpack some of his motivations behind his later actions.

In “The Last Supper”, the apostles in a drunken haze sing “When we retire we can write the gospels / So they’ll still talk about us when we’ve died”. I wonder whether they would have ever thought that the events crucifixion would not have only been talked about and remembered with Easter Eggs and copious amounts of chocolate but would have also been musicalised too. Above all, I think the musical does well to show that independently of the theological context within which the crucifixion is typically understood, the story is a deeply stirring one in which people can still find meaning in it and still feel moved all these many years later.