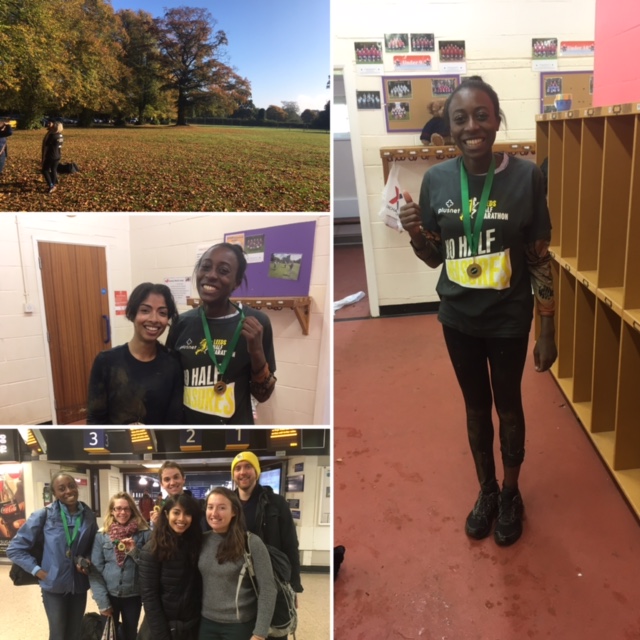 On Sunday 23rd October 2016, I completed the Swanbourne Endeavour, a mud run with a variety of different obstacle challenges designed to test your endurance. I would definitely recommend this race to any adventure seekers who enjoy long distance running but also get a kick out of testing their physical limits.

The race itself takes place in Swanbourne, a beautiful countryside area near Milton Keynes. The interesting challenges include: wading through lots of top-quality mud and deep streams that come right up to your neck; crawling under barbed wire; running through wires with an electric charge; jumping over haybales while inhaling smoke; walking off a plank and descending into cold water and also downing a shot of rum!

The race is designed to suit all fitness levels: there’s a kids race, a 5k and a 10k. For the two latter categories you have the option of doing the ‘Challenge’ or the ‘Elite’ race. The main difference being with the ‘Challenge’ race, that you can take your time and skip certain obstacles if you’d like. Another satisfying element of the race is that the entrance fee goes to support local charities.

I signed up for this race a few months prior, without knowing what was in store; I was simply asked whether I would like to join a team of people doing a 10k in the office. I thought it would nicely tie in with my effort to complete a marathon by 2018 and I would be doing my bit for charity and so saw little reason to say no. Only a month before the race when I looked at the website, did I realise what I had actually signed up for.

When I finally came to accept what was in store, I became fairly excited by the challenge. I have completed difficult hikes and long distance runs in the past, so I liked the idea that this race was to some degree a combination of the two.

We arrived nice and early on the Sunday morning and were fortunate to have bright autumnal weather; the air was crisp and the sun nicely warmed my skin. Rather frustratingly, I was recovering from a cold so thought it best to drop from the ‘Elite’ 10k to the 5k ‘Challenge’ race.

I may be in the minority but I had a really good time taking part in this race. Strangely during the parts of the course where we were free to just run, I couldn’t stop smiling. I’m not sure if it’s the endorphins but I was besides myself with joy taking in the beautiful scenery, the blue skies and the rich colours of the autumnal leaves. But even during the difficult obstacles, there was such a supportive atmosphere among the runners and the volunteers that I found myself enjoying tackling each obstacle.

My favourite obstacle was going under barbed wire: the volunteer at the start thankfully advised that I do a side-ways sausage roll to make it through which made me feel like a kid again. I thought I would struggle without being able to listen to music whilst running, but unsurprisingly I created my own playlist in my head. This of course included ‘Mud, Mud, Glorious Mud’.

Our Private Office team came second overall for the competition and the Team Organiser won the award for Fastest Female for the 10k. I came 9th for the 5k Challenge which has spurred me to sign up next year hopefully when I’ll be a lot fitter.

Firstly, I would say that training for the race helps, but is not essential. I signed up for 1hr Bootcamp sessions every Saturday at my gym. This was led by an ex-military man who really grilled the class to improve their cardio and strength. Despite the fact that my heart felt slightly wheezy from the flu during the race, I definitely felt the benefits of the training pay off. That being said a large majority of the team I was with didn’t train and did fairly well.

Secondly, maintaining a steady pace throughout the course is always best. I definitely noticed a few people sprint at the beginning and regret it later as they had to walk with their hands on their head to recover from a stitch.

Third, be smart with your clothing and make sure it is weather appropriate. I wore a long sleeved top with a t-shirt on top, leggings and trainers. I would avoid anything with cotton or wool (the material would absorb the water and weigh you down). That being said, some participants came dressed as Superheroes and Half-Dressed Waiters and survived! Also make sure you tie your laces as there is definitely the risk that they’ll get stuck in the mud. I would also suggest taking a bin bag, towel and warm clothes to change into after the race.

Lastly, smile and have fun! This race reinforced the truth for me that half the battle for anything difficult will always be in the mind. When I approached a hay bale, I would leap over it with a smile on my face and sure enough made it over and felt so much prouder for it. Though I had never considered doing the Tough Mudder before, this has tempted me to! (But I may need a bit of a nudge).