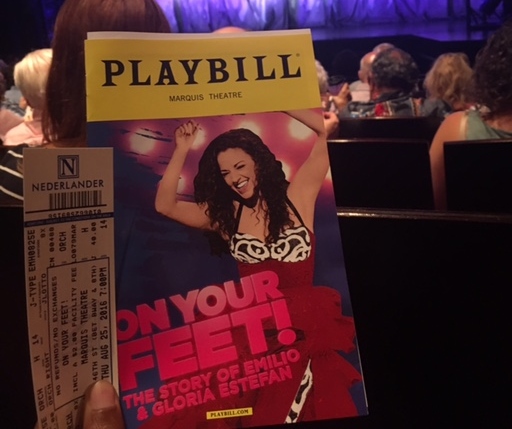 This show is fantastic. I share the same love and admiration for it as I did for the other little known latina musical I saw called In the Heights. I highly recommend it for lovers of feel good musicals who are looking for an entertaining night out. Yes it launches into song often, but the music bursts with such flavour and excitement and the performances are so spell-binding that it is difficult not to get swept up in the energy of it all.

On Your Feet! follows the story of Emilio and Gloria Estefan and how they became big recording artists, not only within the Spanish Charts but in the US and later around the world. I believe Gloria Estefan and the Miami Sound Machine are recognised as the most successful crossover artists in the world. The idea for a bio-musical is not new and has been done by other hit shows such as Jersey Boys: the Story of Frankie Valli and the Four Seasons and Beautiful: The Carole King musical – two shows which I also thoroughly enjoyed. But it did not feel formulaic, rather it’s uniqueness was enchanting. Aspects which contributed to my enjoyment included its live on-stage band (including the original members of the Miami Sound Machine), the athletic and well-executed performances of the dancers, the up-lifting music and also the surprise Conga line through the theatre just before the interval.

Without knowing much about Gloria and the Miami Sound Machine, I recognised quite a few of their songs. The score includes classic 80s hits such as ‘Anything for You’, ‘Wrapped’, ‘Conga’, ‘Rhythm is Gonna Get You’ , ‘1-2-3’ and ‘Get on Your Feet’. My favourite numbers were those where the song was interweaved into the plot such that the song was performed as if the audience were in a concert. I realise this is not to the taste of all theatre-goers, but it is clear that this show is not for those seeking intellectual stimulation but for audiences who just want a good night out. The choreographer,  Sergio Trujillo, did such a stellar job of introducing a variety of Cuban and American dance styles to the stage. The performances were so lively and rhythmic it made me dearly wish that I could join the performers. One stand out performer  was the eleven year old firecracker who led an impressive dance break, Eduardo Hernandez. ([Un]fortunately I wasn’t able to find any bootlegs of his performance, but I did find footage of his entry in a dancing competition).

The leads Ana Villafañe and Ektor Rivera who played Gloria and Emilio Estefan respectively delivered knock out performances. I was captivated by their fiery chemistry; you could definitely feel the intensity of their passion for one another and that which they shared for the music. The romantic plot and the strength of their love for music is clearly the core of the story and the two actors did well to invite the audience to follow their journey and to feel moved by the end. Another notable performance includes Andrea Burns who was able to provide great comic relief but also delivered heart-breaking scenes as she feuded with Gloria.

An important theme of the standard American musical seems to be the pursuit of the ‘American dream’. Although it is a theme that I have grown tired of hearing about, the story in the musical did well to explore an issue in the American Music Industry that I was not entirely familiar with. I was fairly surprised to learn that the band struggled initially to get their music out to US audiences. At the time it was unheard of for American Record Labels to produce music which used latina rhythms and English words. But in the face of difficulty, the band found success through going to every club that they could and shared their music. Ultimately due to their persistence at overcoming every hurdle they were able to become a global phenomenon and pave the way for other english speaking latina artists. Is this evidence that the American dream exists? I’ll leave that debate for another time.

Without knowing how this show is doing at the box office at present, I do sincerely hope that it will transfer to the UK because I am fairly certain that London audiences will enjoy it as much I did.

Click here to see my On the Spot Review

One thought on “Review: On Your Feet! The Story of Emilio and Gloria Estefan, Marquis Theatre”